Do you see roaches in your home and want are looking American cockroach infestation signs?

You’re in the right place!

There are some proof that argue that the American roaches were first introduces by Africans in the early 1600s.

Generally, American cockroaches are reddish brown with a yellowish figure 8 pattern on the back of the head

The US roaches are oval-shaped

Yeah, They do have two

American cockroaches in most part of the world.

Adult American cockroaches fall between 1.4” to 1.6” (35-41mm) in length, but they can grow beyond 2”. American cockroaches are reddish brown in color with a yellow band that shows the area behind their head. Both females and males have wings and can fly short distances.

American cockroaches can bite, although they hardly do. If they bite you and it becomes infected, it can become problematic.

These are signs you might have roach infestation in your hands:

You will see fast-moving insects often running towards dark areas.

Second, you will see droppings of American cockroaches in areas they hide in. These small poops are blunt on the ends and have ridges on the sides. Some homeowners mistake them for mouse droppings, so it’s important to reach out to a pest control professional for proper identification.

Another sure sign of an American cockroach infestation is the presence of egg capsules, that are about 8 mm long and dark-colored. Egg capsules at times are found glued to a surface near food sources, and can be found in basements, kitchens and laundry rooms, as well as underneath cabinets or behind appliances.

The last point is that American roaches will produce a pheromone that some humans refer to as having a “musty” task for homeowners to do themselves.

How to Get Rid of American Cockroaches

Roaches are one of the most resilient pests in the word. They are rugged and have a bunch of survival tactics, including the ability to live for a week when beheaded. This makes getting rid of American cockroaches a hard task for homeowners to carry out themselves.

Like you, a lot of people will take several steps, to reduce their population via cleanliness and exclusion. Barrier exclusion involves preventing cockroaches from entering the home via small cracks in walls, gaps near electric sockets and electric sockets, and up through drains. Use a silicone-based caulk to seal these openings.

Having a clean, neat and sanitary home is the #1 rule to discouraging American cockroaches from entering your home. Homeowners should keep sinks, floors, tables and counters free of crumbs and clutter. Avoid leaving dishes pile up in the spills or sink marinate on the counter.

It’s also great practice to avoid leaving pet food in open areas and to store food in airtight containers. Vacuuming once or thrice a week to rid your floor of flood particles can help ventilate crawl spaces to prevent moisture buildup and running water periodically in spare bathrooms to keep u-traps filled.

Once upon a time there had been more than 5,000 individual cockroaches were once found in a single sewer manhole. In the Southern United States, American cockroaches can be seen in shady, humid areas like underneath mulch piles and flowerbeds.

You will find them in alleys and yards in outdoors during summer month too.

When the climate changes or there is scarcity of food, American roaches will move into your home. Generally speaking, roaches in America prefer warm, moist and dark environments with temperatures between 70 and 80 degrees Fahrenheit. They are introduced to homes via human belongings, coming up from the sewer systems through occasional mass migration from other structures, or coming from the sewer dumps, etc., during warm weather.

If you see cockroaches larger commercial buildings such as restaurants, bakeries, grocery stores, food processing plants, hospitals, etc., it is likely that you have American cockroach infestation in your hands. 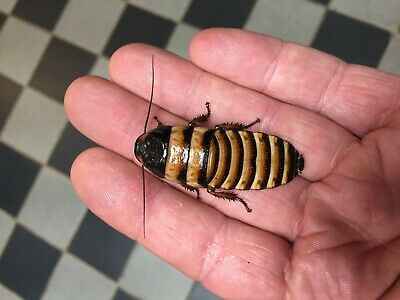