Skip to content
Home » Cockroaches » General » Do Roaches eat Each Other? WHY? – FIND OUT
General

Do Roaches eat Each Other? WHY? – FIND OUT

Roaches are the most despised bugs that have ever lived in a human’s home. To make matters worse, a variety of roach breeds have exhibited cannibalistic tendencies.

Yes, common cockroaches have shown cannibalistic traits, especially when food and water and water are scarce.

Do Roaches eat Each Other?

Yes, roaches can and will eat each other, especially in famine conditions. Disgusting! Yes, I agree. While this trait may not be so glaring in all 4,000+ roach breeds, it has been proven that Oriental Cockroaches and German cockroaches do this.

This repulsive act could explain why roaches have survived for this long. Science say that cockroaches date back to the time of dinosaurs.

Do Madagascar Hissing Cockroaches eat Each Other?

If they outgrow their enclosure, Madagascar will eat the weakest member. 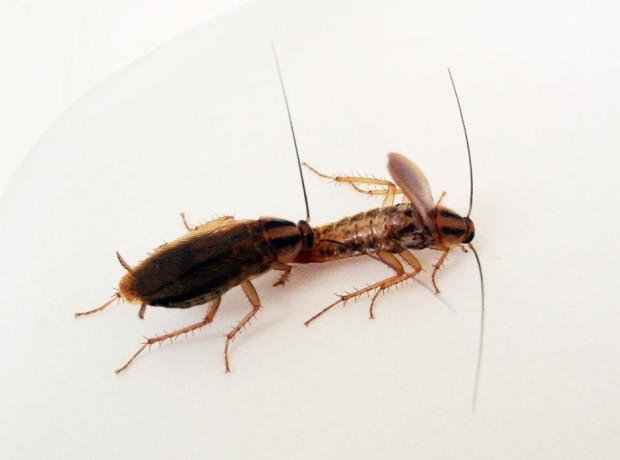 Why Do Cockroaches Eat Each Other?

Roaches will and can eat almost everything. They prefer sweets, meats, starches – which is one of the reasons why they sometime often infest man-made buildings where such food sources are readily available. But, what makes them become cannibalistic?

For starters, their growth plays a major part in the act of cannibalism. The reasons can be further divided into two:

As you already know, roaches are prolific breeders. Once their population intensifies, roaches outgrow their available food source.

So, roaches will then eat each other for survival and food. Generally, the strongest get to feed on the weakest.

See also  Can Cockroach Cause Baldness? eat Hair? - FIND OUT

Their cannibalistic act can work in your favor if you’re trying to control their population.

Once a roach consumes a bait strategically placed, it can pass that bait on to the rest of the roaches in the nest if it becomes a victim of cannibalism in the nest.

Another reason why cockroaches may feed on one another is due to self-regulation. A large population number means lesser food go around. Ridding the pack of members of the intrusion means smaller mouths to feed, resulting in more food for everyone else.

In most cases, this happens with the females consuming the nymphs and eggs when food and water becomes scarce.

German roach nymphs can at times avoid being cannibalized by foraging for food when the sun is up. Adult roaches on the other hand love to carry out their activities at night. These nymphs too can also develop a pheromone that repels adult roaches.

Roaches aren’t the only bug that practice cannibalism. Other species of beetles, fish, spiders, and snakes have even shown to feed on their own species. In fact, amphibians can at times choose to feed on their young/sick members.

It has also been said that female American cockroaches can sometimes feed on their mate when mating (like a black widow spider does).

So, can roaches eat each other?

Yes, cockroaches can become cannibals ONLY out of survival urges. It lets the strongest survive.