No. Cockroaches do not have book lungs; they instead breathe through a narrow opening on the sides of their body called the spiracles.

Book Lungs, on the other hand, is, found in most arachnids like the spider and scorpions. Book lungs are located within small openings in the abdomen of the arachnids.

It is used for atmospheric gas exchange when the arachnids move; the air is pushed in, and out of their body, the book lungs are immersed in hemolymph that carries oxygen to nourish the body arachnids.

Do All Cockroaches Have Lungs?

After drawing air, the trachea, a tube-like structure, transports the air directly to the cells.

Unlike human breathing, which is continuous even while sleeping, roaches are pretty different. All the spiracles can close down, causing discontinuous ventilation, and the bug will still be alive.

Large species of roaches live up to a month without their heads, while German cockroaches can survive up to a week after decapacitation.

This is because when the roaches head is cut off, their neck gets sealed immediately, and since they have got tiny openings in their body, they can continue to live. 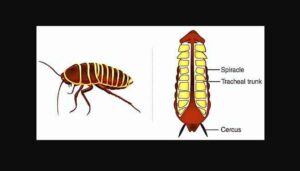 Yes, cockroaches do breathe, but they do not breathe through their mouths but rather through tiny openings in their body located on their thorax called spiracles.

Some Cockroaches, however, can go up to 40 minutes without breathing, and others can survive up to 30 minutes underwater.

The oxygen breathed by cockroaches travels through a system of trachea tubes and is distributed evenly through the insect’s body.

Do Cockroaches Have Lungs?

No. Cockroaches do not have lungs. They have a respiratory system made of trenches. The trachea is made of air-filled tubes. It opens up at the surface of the cockroach’s thorax and abdomen through paired miracles.

The trachea is connected to the outside through spiracles, and air enters and exits through diffusion without the muscular contraction of the trachea.

The Madagascar hissing cockroach can, however, force air out of the spiracle, so it makes a hissing sound to scare a predator away from them.

While it is notable that cockroaches do not have lungs, they can continue to breathe even when their head is cut off; the end of the tracheoles contains fluids; it is where both the juices and the gas meets.

How do Cockroaches Breathe?

The respiratory system found in insects is quite different from that found in other animals and mammals.

The cockroach has a respiratory system called the tracheal system. The trachea is a tabular structure that helps conduct air in and around the insect’s body.

The trachea takes in oxygen from the environment into the body.

The cockroaches have the spiracle; the spiracles are small holes present on the lateral surface of the insect’s main body.

The opening takes in air from the surrounding, similar to the human nostril; with the help of the spiracles, the air is taken in then the air will travel through the tracheal tube.

The muscular sphincters regulate the spiracle’s opening; when they open, perspective comes in, but when the Sphincters close, air will no longer be able to go in.

The concept of the respiratory system in cockroaches is like that of the human system, in the way that miracles act as opening just like the nostril.

Yes, just like human beings, cockroaches breathe in oxygen and expel carbon dioxide with the help of the tracheal.

Although the cockroach does not live in the oxygen through the mouth; instead, the oxygen enters their body through a system of trachea tubes and then gets distributed to all parts of the insect’s body.

Cockroaches can hold their breath for a specific time; they have a highly efficient respiratory system.

Does a Cockroach Breathe Through Skin?

Can You Suffocate A Cockroach?

Yes. Cockroaches have been known to survive without many necessary resources for a longer time than another organism; they can stay up to three months without food, 45 minutes without air, a month without water, and handle radiation 15 times better than a human can.

The chances of cockroaches surviving drowning are very high; they can survive for up to a quarter of an hour without air; this makes drowning them easier.

To suffocate them into dying, you will need to place them in an airtight plastic bag for up to a week; they will live in the bag for some time until the air eventually runs out.

Cockroaches are resilient; they are well adapted to living in extreme conditions and environments without dying.

This method is not that effective because cockroaches can float on water most, especially if their spiracles are closed, and it is challenging to have them submerged.

Cockroaches can die of suffocation, but it is not the most effective way of getting rid of them; they are highly resilient and possess a unique respiratory system that enables them to survive even with limited oxygen.