For decades, borax has been used in laundry detergents, home cleansers, and other items. It’s possible that you already have a box at home. It’s a versatile, natural mineral that’s also, as you’ll be pleased to learn, and fantastic pest control tool!

Cockroaches are infamous for spreading illnesses and are tenacious as heck.

Indeed, you may have already read or heard dozens of anecdotes indicating that Borax is effective in the battle against roaches.

On the other hand, is Borax genuinely efficient in killing these obstinate scavengers? Let’s see whether Borax is a good enough roach repellent to eliminate the need for a pest control service.

Borax is a mineral compound made up of boron. According to IUPAC (International Union of Pure and Applied Chemistry), its full chemical name is sodium tetraborate decahydrate.

Pure Borax is a colorless powdered element that may be transformed from crystal form. Boric acid, commonly known as hydrogen borate, is produced when this chemical compound is treated. Even though both Borax and boric acid are potent insecticides, they are two completely distinct compounds.

Borax is a naturally occurring element that has a variety of applications. It’s employed as a:

Is Borax Safe to Use?

While using Borax to manage cockroach infestations, be cautious when handling the compound, especially if dogs or children are present, since this white powder might be mistaken for something edible.

Despite its reputation as one of the safest and most efficient chemical compounds for cockroach control, Borax can nevertheless create health issues.

When inhaled, it might irritate the respiratory tract. It might cause modest digestive system issues if consumed.

If this occurs, you must get medical help right away.

Is it true that Borax kills roaches instantly? A roach that comes into contact with Borax does not die right away. Instead, they’ll return to their hiding spot before consuming the borax dust that their legs have collected. Although you may not see the dead bugs lying around in the open, you should notice a decrease in their numbers after a week or two.

Why Does Borax Kill Roaches?

Borax works by attracting cockroaches’ legs with static electricity, similar to how rubbing a balloon on your head causes your hair to stand up. Once it has returned to its hiding location, the roach will clean itself later by eating the white powder. The Borax works as poison in the roach’s stomach once consumed.

How to Use Borax to Kill Roaches

It’s as simple as combining equal parts Borax and sugar in a squeezable container and dusting the places where roaches have been sighted. A powdered sugar dispenser or equivalent container would suffice as long as you can disperse a little dusting.

Boric acid is an efficient way to kill cockroaches when used appropriately. However, boric acid might lose its effectiveness if used wrongly or excessively. Furthermore, it might generate a significant mess because it is a powder. 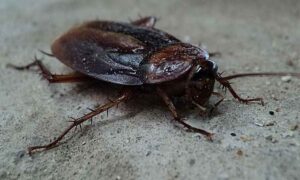 Are Borax and Boric Acid the Same Thing?

The compounds borax and boric acid are two distinct forms of the same substance. Borax is a mineral (a type of the element Boron) extracted directly from the ground and used in cleaning goods. Boric acid is the extracted, processed, and a refined compound found in many chemical products.

Which is better to kill Roaches, Borax or Boric acid?

When it comes to killing bugs, boric acid is your best choice. Although some people mistake the two or believe they are the same, Borax should not be used as a pesticide. Borax can eliminate pests; however, it is not as effective as boric acid. Boric acid is frequently used in insecticides.

Is it possible to use the Borax Spray?

Borax is particularly good in killing and controlling fleas, silverfish, and beetles, among other insects. According to the University of Kentucky, it is one of the most successful strategies for controlling cockroaches in and around the home when used appropriately.

ALSO SEE: Why Do I Only Find Dead Cockroaches in My House

Do Borax and Vinegar work Together?

Two harmless substances, Borax, and vinegar, maybe mixed to make a decent general cleaning solution. Mildew can also be removed with undiluted vinegar and Borax. It’s critical to use warm water when combining Borax with other substances to help it dissolve.

The roaches must consume Borax to be effective as a cockroach killer. Borax works by attracting cockroaches’ legs with static electricity, similar to how rubbing a balloon on your head causes your hair to stand up. Once it has returned to its hiding location, the roach will clean itself later by eating the white powder. The Borax works as poison in the roach’s stomach once consumed.

It also harms the exoskeleton of cockroaches (and their digestive system). Borax is technically sodium tetraborate, and the “sodium” component penetrates and dehydrates the roaches’ exoskeletons. Cockroaches are prone to dehydration, so Borax is such a potent pesticide.

How to Use Borax to Kill Roaches

A roach figure looks uncomfortably on a cabinet shelf with a dish of sugar, a box of Borax, and a box of baking soda.

Many supermarket shops sell borax powder, usually found in the laundry or soap department. Large powder containers may be available at hardware and pool supply stores. It’s even available as a liquid or a spray at certain retailers.

In general, powdered Borax is the most effective. It’s easier to distribute and combine with different baits this way, and it clings better to roaches’ legs.

Here are a few easy recipes for borax specks of dust and other cockroach baits that will kill them in your home!

Will Borax and sugar kill roaches? It certainly will, and it’s one of the most straightforward borax pest control recipes. It’s as simple as combining equal parts Borax and sugar in a squeezable container and dusting the places where roaches have been sighted. A powdered sugar dispenser or equivalent container would suffice as long as you can disperse a little dusting. Just don’t sprinkle powdered sugar on your pancakes with the same dispenser!

The sugar in this recipe attracts the roaches, and the Borax in the mix is eaten along with the sugar. That’s all there is to it!

Expert tip: When shaking the bottle, add a few coins, marbles, or small rocks to break up clumps.

Using both Borax and baking soda may be excessive if you’re currently using one. Baking soda is a natural roach killer. It’s already poisonous to roaches and might be used instead of Borax. Cockroaches are killed by baking soda because it causes gas to build up in their digestive tracts.

However, because both things are pretty simple to come by and affordable, there isn’t much of a disadvantage to mixing them. You can mix Borax and baking soda to attract the roaches, but you’d be better off using one of the other baits listed in this article.

Try to come up with a cuisine that isn’t attractive to cockroaches. We’ll be patient.

While various natural cockroach repellents are on the market, cockroaches will scamper away from just much anything tasty. You’ll want to utilize the foods that cockroaches prefer to make your borax cockroach baits as successful as possible.

Leave a teaspoon of peanut butter in a dish or plastic lid and sprinkle it with Borax.

Liquid baits: As you’ll see in a moment, using Borax with liquid baits is probably not a good idea. Instead, you may scatter borax dust around the bait container to encourage the roaches to go through it.

These bait-and-borax combinations may be concealed in corners, cabinets, electrical outlets, and other strategic locations by adding Borax.

Roach balls made of Borax

This procedure works; however, it needs some desirable bait since the cockroaches must devour the combination right away in a straightforward recipe, borax powder, flour, or sugar combined with cornstarch and onion powder. Then, gradually add water until the “dough” becomes balls.

Once you’ve prepared a few balls, please place them in tiny bowls or baggies and conceal them in places where you’ve noticed roach activity (but where children and dogs won’t be able to get them).

Expert tip: Boric acid and milk may be used in place of water, and Borax and cockroaches won’t know the difference.

Some Quick Tips on Using Borax for Roaches

A dead cockroach is seen next to a borax box in this illustration. “Quick Tips” is written on the label.

It’s preferable to use a thin coating of borax powder so that the roaches aren’t bothered.

Instead, stick to dry combinations or use boric acid.

While Borax is a naturally occurring mineral, it is not safe to consume by yourself, your children, or your pets. So please keep it away from pet food, human food, and anything else where small hands may get a hold of it.

Eliminating most roaches demands drastic actions; one needs to be sure of the chemical they are using, so we have discussed all you need to know about Borax for roaches and other information you need to know.