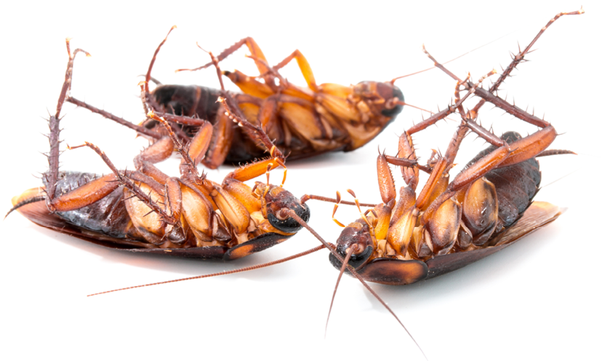 Have you ever found a cockroach die on its belly? I guess not. It is always on their back.

This brings us to today’s question – Why do roaches die on their backs? We’d be answering that and several other related questions below. So, we advise you read till the end.

How Do Cockroaches Die in the Wild?

Truthfully, roaches in the wild do not always perish with their feet dangling in the air. Actually, most die in the stomach of a predator.

Plus, roaches who manage to stay alive until “old age” can lose their life with their belly on the ground.

So, in other words, there are no magnet field or force that automatically flips roaches so they can die on their backs.

Why do Roaches Die on their Backs?

Cockroaches die on their backs because most of their body weight is around their backs. When near death, its weakened muslces malfunctions (and flips it) and its weakened muscles prevents it from righting itself, especially on smooth surfaces.

So, Why Do Cockroaches Die in my House?

Well, since homes often have some of the best temperature for roaches to breed, they cannot resist making their way into yours and making themselves as comfortable as they can.

Like turtles that fall on their back, and then cannot get up without help, the same thing happens to roaches.

In the wild, roaches have access to rocks, tree trunks, branches, and patches of vegetation that could help lift them up but since these things are not in your home, the roaches stuck on their back long enough without water or food then die in your home.

How Long does it take for a cockroach to die after being Sprayed?

It can take from a few minutes to several hours (depending on the strength of the insecticide).

When roaches are sprayed, their nervous system become compromised by the insecticide. The usual response to this is the cockroach flipping over and experiencing muscle spasms after.

This makes it less likely to be able to return to upright position.

Why do Roaches attack me When I miss?

Roaches have emotions and are become more adaptive than they ever did. Like animals, when insects feel threatened, their instinct to protect themselves kicks in. So, this may look like they are trying to bite/attack or take revenge on you.

Roaches are pack animals and this may explain why they might come back to dead comrades.

How long can Cockroaches Be On Their Backs Until They Die?

This will depend on what made them fall on their backs. Most times, they give up the ghost right before they flip. If you commonly use a bug spray, then the time it would take to wiggle on its back would depend on the amount and strength of spray.

But, if it lands on its back on its own by force or by “accident”, then it wouldn’t take much time for it to regain balance again. So, keep that in mind.

Why does the Bathroom Sink Soap Not Kill Cockroaches?

Easy! It is because the ingredients of the soap are not harmful to roaches. There’s plenty chemicals that roaches can withstand when doused. Only certain chemicals like boric acid can put them to sleep.

How can You Save A Cockroach From Death?

It depends on several factors. If it has inhaled/ingested insecticide, then you may wash it with water. It may be too late, though, but it is worth a short. Generally, roaches die of thirst, so giving water may help save its life too.

Why do Cockroaches Move after I stepped on it?

Cockroaches don’t die easily! It is said to have survived since the time of dinosaurs because of its tough exoskeleton.

If you accidentally step on one and would like to save it, we recommend leaving it alone to recover. If on the other hand you want it dead, just throw it to the birds (especially chickens).

Do cockroaches grow a line every year they are alive?

For now, there are no evidence to support this. This would be cool to watch though.

Will Roaches die if they are flushed down the toilet or Drain?

No, they won’t! Cockroaches can survive drowning which is what may occur if you flush them down the toilet. In the end, they will crawl on the sewers and continue living their best life.

Do cockroaches feed on other Cockroach’s?

Yes, roaches can feed on other roaches when food and/or water is scarce and they need to control the population size.

Bleach may prove fatal to roaches when ingested. Spraying over may take sometime for the bleach to be ingested, so this may not be as effective as other pesticides like boric acid.

Why Do Roaches Come Out to Die?

The reason for this is not explicitly clear. Unlike several animals that prefer to find isolated placed to die, cockroaches have been reported on several occasions to migrate to the center of the room before giving up the ghost.

Personally, I have watched dying cockroach comrades making their way to the center of my living room after being sprayed with insecticide days earlier. To avoid steeping on them, I or my siblings would kick them aside. When I come back a couple of hours later to collect the dead bugs, I find some half-alive zombified cockroaches have found their way to the center of the room again before dying.

One reason why roaches may act this way is that they are disoriented and plagued with muscle spasms. This confuses them and makes them make their way out of their secret dens to pubic places.

Roaches can, and will play dead if it keeps them alive. A lot of homeowners have reported seeing cockroaches stay completely still (sometimes fake death by rolling onto their backs) until a human threat or presence goes away.

Once they see that the threat is gone, they flip back on their feet and scuttle away to safety.

Why do Roaches Play Dead?

Since roaches can hold their breath for up to 40 minutes, they make great actors. They often play dead to deter a threat.

In a Mythbusters experiment testing if a cockroach could drown, the sample roaches appeared dead after being submerged in water for 30 minutes. But, the next day, all of the supposedly “dead” cockroaches were alive.

Do Cockroaches Sleep on their back?

There is no proof that they do. They prefer to sleep on their belly.

Why do I only Find Dead Cockroaches in My House?

It could be because ground beetles are killing them or because they have no access to food or water.

Why Do Cockroaches Move when Dead?

Cockroaches move when they’re not COMPLETELY DEAD. It may take a while for a roach sprayed with insecticide to die as the insecticide travel around their nervous system.

After sometime, the roach will just writhe about until they die.