Have you seen any Turkestan cockroach in houses you own? Want to learn how to make your home roach-free?

It was first introduced into the US in the late 1970’s, and has since been a bad neighbor.

Here is quick information about this bug pest – it’s eggs, how it breeds, control, habitat and how to prevent it from getting into your home.

The adult Turkestan roach females are around 1 inches long, colored dark-brown to black, and possess cream-colored markings along the edges of the body and behind the head.

The females possess rounded wings with light-colored stripes along the wings edges. The male Turkestan roach is smaller than females, are brownish red or orange, have yellowish wings that extend beyond the tip of the abdomen feature the same cooler markings on the margins of their body as do the ladies.

See also  Does Killing A Cockroach Attract More? FIND OUT!

Other names of the Turkestan cockroaches is rusty red cockroach or the red runner cockroach.

Typically, Turkestan roaches often live outdoors, but can be seen indoors when their population goes out of control in summer months.

In most cases, the males are found inside as they are attracted to lights and fly into your home. Outside, their most loved habitats are electrical or water meter boxes, compost piles, cracks in concrete, potted plants or fallen leaves.

Like many other roaches, Turkestan roaches are active after dark.

These explains why Turkestan roaches can out-complete and replace oriental roach population in some places. 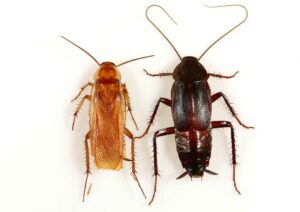 A female Turkestan roach will make about 25 oothecae (egg cases) all through her life compared to 5-10 oothecae for an oriental roach.

Signs Of An Infestation

The most obvious signs of a Turkestan cockroach infestation are seeing them flying at nighttime around lights and finding them in their preferred habitats.

Blatta lateralis is most popular in central Asia, Northestern Africa, India and Middle East. In the United States, the Blatta lateralis is well spread across California and Urban cities in the southwest, Northeast and Southeast too.

Turkestan roaches were brought into the US through military shipments from the Middle East.

This species can be bought online. They are quite popular amongst animal breeders who use them to feed their pets.

At first look, the Turk roach looks like the American and Oriental nymphs in general appearance. However, the oriental roach is uniformly dark-brown and the American cockroach.

The Turkestan, on the other hand has a thorax and head that is reddish-brown and has only the rear body dark-brown.

Plus, the male Turkestan roach is smaller, Australian and American roaches can be distinguished by bot the markings on the prothorax and wing borders.

The Forewings margins of the Turkestan roach are pale and almost transparent as compared to the uniform-colored wings of the American roach, and the bold yellow margins of the Australian.

Oriental control methods can be applied to Turkestan roaches too. Granular roach baits have proven effective too.

You should pay more attention to pest proofing doors and other building entry points to keep roaches outdoors where they pose the least trouble.